The roots of Theo’s Timber

Theo’s Timber have been based in Manchester since 1990, and owned by the same family ever since. In Manchester, the present story started when Aubrey, Jason, and Theo moved to the city. Going further back, Theo’s Timber and the Noyek family have four generations of timber and woodworking experience under their belt. 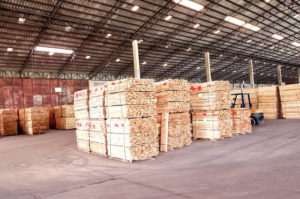 The story begins in 1890 when Abraham Noyek set up a woodcarving and cabinet making business. Though his work was much lauded, Abraham and his family mucked in keep the business ticking over. As trying to get payments off customers left them out of pocket, the children (Bernard, Sam, and Teddy) had to sell logs after school. Their mother, Molly, stained the furniture for Abraham.

In 1916, they moved to premises on 200 Parnell Street, Dublin. They gained a great reputation with passersby with Bernard’s woodcarvings attracting attention. Noyek’s reproduction furniture were manufactured at a factory on Granby Lane, which acted as a clandestine refuge for Jewish boys avoiding conscription in England (due to the First World War). The Parnell Centre, complete with a Cineworld multiplex cinema, stands on the site.

After the First World War, the Noyeks moved towards the seasoned timber market. In 1933, following the death of its founder, Abraham, Molly and three of their sons (Sam, Bernard, Teddy) ran the business. Following the death of Teddy and Bernard’s move to Canada (where he manufactured plywood aircraft), Molly and Sam took the business into the second half of the 20th century. In 1946, they were joined by Harry and Ivor, fresh from service in the American forces.

In the 1950s, Noyeks opened the Republic of Ireland’s first plywood factory. With the slogan, Noyeks for Plywood, A. Noyek and Son’s base on King’s Inn Street and Parnell Street specialised in plywood for shop fittings. They were also an import/export agency. In 1963, they were sold to a multinational company with Aubrey Noyek becoming Chief Executive in 1969.

The 27 March 1972 was a black day for the Noyek family. A fire at Noyek’s Timber Merchant in Dublin claimed eight lives after a can of EvoStik adhesive was knocked beside a gas heater. Following an investigation in 1975 and similar incidents elsewhere, this led to changes in the Republic of Ireland’s fire legislation in 1981.

In 1980, Aubrey formed Aubrey Noyek Ltd, before this was taken over by a multinational company. So Aubrey, along with his two sons, Jason and Theo, moved to Manchester in 1990, setting up Noyek Plywood. The Dublin business became Noyek Newmans, which was sold to its management in 1991. Our business, known as Theo’s Timber, not only gives us access to high quality plywood and timber products. You have a wealth of experience stretching back to 1890. Long may the tradition continue on both sides of the Irish Sea.